Yesterday morning I attended the parade of the flower festival, which just passed by nearby my hostel. Hence, even as I was 30 minutes “late” I didn’t missed anything – but anyway the Thai were not on time at all. The parade consists mainly of marching bands from several schools, parade floats with different motives and some other groups. These floats were individually decorated with colourful flowers and sponsored by different organisations. But as I don’t read Thai I was unable to identify them. After two hours the parade was finished and followed by a large traffic jam, as everyone needs to drive along the road immediately. I was walking into the old town and visited some Wats, which are all in use. Some of the more popular ones requested entrance fee, but as there are so much around here and all looking more or less similar I just decided to visit the ones which don’t require any fee, as for me, in the end, everything is same, same. In between I visited a park with lots of flowers and much more people which taking pictures of them. So I escaped from the crowds. Somehow this city remembers me at Luang Prabang, which had also lots of Buddhism temples and tourists. In the end I was exhausted from all those crowds and needed some relaxing. Luckily I found a small boulder gym in the old town. Together with Anna&Anna, both from the Netherlands, I went there in order to do some moves. It was really small and all the routes pretty hard. Not that they all had some overhanging part, the were bolted also mainly for small people. On the one hand it was nice to do some moves, but contrary to me nice experience in Bangkok I was a bit disappointed afterwards and felt a bit bad for the girls, as this was her first experience and they struggled already at the most easiest ones. 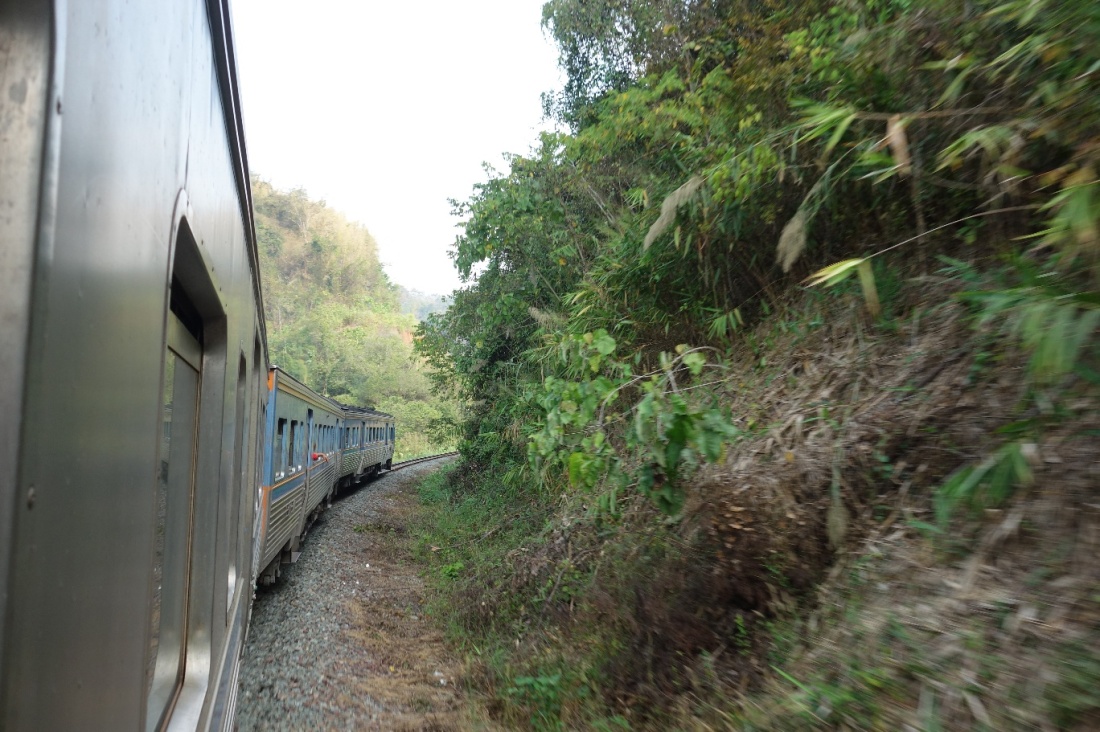 Thursday evening I took a shared minivan from Sukhothai back to Phitsanulok. On a very last minute request I was hosted by Zom and her boyfriend Ryan in Phitsanulok. Zom drove me also Friday morning to the railway station in order to catch the early local train to Chiang Mai. The train was basically a DMU and stopped at each railway station. Nevertheless, it made its way continuously across the mountains. Compared to the first section to Phitsanulok, the landscape was varied during this leg and time just passed by. Two passenger trains and cargo trains drove in the opposite direction of this single track railway, but everything was on time and we arrived in Chiang Mai with less than 5 minutes delay. When I was taking the songthaew from the railway to the old town the driver scammed all foreigners and requested 50 Baht, but in essence it was only 30 Baht. As you don’t get any change, you should have the amount always appropriately. In Chiang Mai I met Yvonne and we spent the afternoon and evening together. First we attended the opening ceremony of the 43rd flower festival and watched some dances. But as the music was not our style, we decided to go to a Jazz bar, where a friend of her was playing trumpet, and I enjoyed the music with a beer. 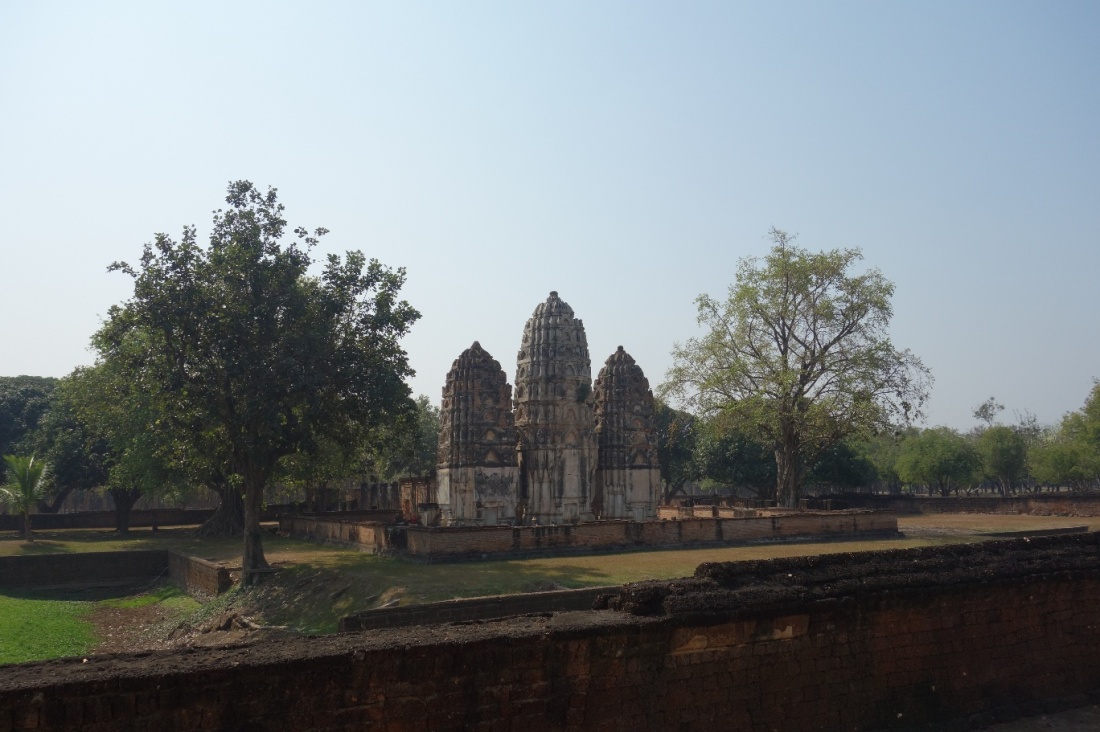 Tuesday I visited the Sukhothai Historical Park in the old town of Sukhothai which is approximately 15 kilometres away from the new town. Hence, I took a large songthaew in order to get there, as this is by far the cheapest way. The historical park consists of three areas and you have to pay entrance fee for each of them. One can also rent bicycles in order to get around, but an additional entrance fee applies to them. As the park itself is far smaller than Angkor Wat I decided just to walk around, and only bought the entrance fee for the central area. The central area can be discovered easily by foot, except you’re in the age of the average tourist here, than you might want to take one of this electric “cars”. In the central area there are lots of old temples, most of them are already ruined…and if not they might be reconstructed, mainly in the 1950’s. First I started with the Wat Si Sawai, which has three large towers, then I continued to Wat Trapang Ngoen, with a small island on a pond. Afterwards I was walking to Wat Mahathat which is the largest Wat in the complete park, but only few buildings still remain. The only thing which is intact is the old tree, which is supposed to be 500 years old. I passed by the king monument, a 3t bronze statue, and then headed to Wat Si Si, which is completely located on an island. Afterwards I went to the northern area, but honestly speaking, it’s not really worth to get there, except the way to the Wat, as the area is covered with several trees and one can easily walk in the shadow, even the area is completely dry at the moment. I visited only two temples. First the Wat Phra Phai Luang, which consists of three towers, but only one remained, and is inhabited by bats at the moment. The Wat Si Chum has an impressive large Buddha, but everything was reconstructed in the 1950’s. Hence, I wasn’t that impressed, and didn’t knew why I spent additional entrance fee there. On my way back I passed by another nice Wat with several elephants decorating it. This one was pretty nice. In essence the whole park is much smaller than Angkor Wat, and also less impressive. Not necessarily because of the size, but maybe mainly due to the fact, that most of the buildings are only ruins are just more or less recently reconstructed. 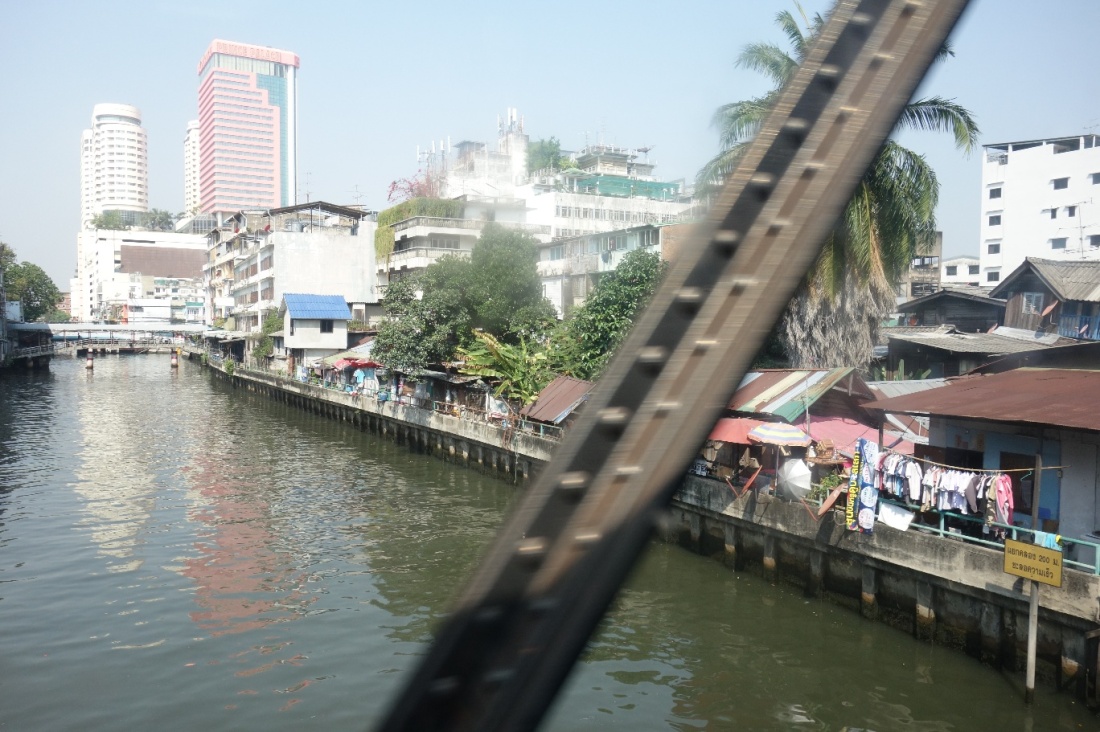 Monday morning I woke up very early in the morning and took the shared minivan already at 5:30, but due to Monday morning traffic jam, full airlink and MRT subways I just arrived at the railway station at 8:15. Nevertheless, enough time to buy a ticket and catch the train at 8:30…I thought. But unfortunately the train to Chiang Mai was fully booked, and this is the only day train available. Hence, I needed to adapt my plans and first went to Phitsanulok. Somehow I ended up in the express train, which is a bit faster and more comfortable, but nevertheless almost 10 times more expensive than the ordinary train. In the end I was surprised to get served at my seat with free lunch as well as free coffee and a cake. I can’t imagine to have had such a service before. After arriving in Phitsanulok I walked to the bus station and took a shared minivan for about an hour to get to Sukhothai, and directly next to the bus station I even got a cheap but still nice hostel. In the evening I walked to the night market. But along the way there were lots of dogs, which were barking, that was kind of annoying, but I found a long stick in order to keep them away from me.